I’m putting together my list of yearly challenges, this one is straight on the must do list, it sounds fantastic fun.
Bordeaux’s Marathon du Médoc; 12th September 2015
The course is 26.2 miles through scenic vineyards and the participants – in compulsory fancy dress (obviously) you are also expected to indulge in at least 23 glasses of the famed vintages en route, while also stuffing yourself with local specialities such as oysters, foie gras, cheese, steak and sweets.
Unlike other marathons the aim of the Marathon du Médoc isn’t to finish first but to finish as close to the 6 hr 30 minute cut off as possible to fully indulge in as much wine and food as you can.
There’s even a pasta party the night before full of booze and carbs. Designed to give you the required energy and also be so hungover a glass of wine 5km into a 26 mile run seems like a good idea.
Well, booking doesn’t open until February otherwise id already be booked in for this, Who else is in? 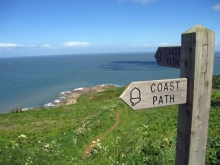 This looks like a fantastic challenge which will involve seeing some of the best coast line in the UK. It’s also England’s longest national trail. It’s a 630 mile hike.
Starting in Minehead in Somerset and covering the southwest tip of England finishing in Pool.
At a brisk pace this would take at least a month, by why would you do it at a brisk pace, I think it would be much better to complete it in around 6-8 weeks and really enjoy this part of the uk.
It has been rated one of the best trails to be found in the world by the lonley planet & voted Britain’s best walking route.
If 8 weeks off is out of the question for walk? Then they recommend breaking it up into chunks. I personally really want to do this as I love this part of our coastline. (Duncan)

For the next 5 weeks I will be competing in the Crossfit open. Its the largest fitness competition in the world with last year over 209,000 athletes competing. The aim of the open is to find the fittest “man and women on earth”
There are hundreds of thousands of competitors from all over the world competing and you get to submit your scores and see how you compete.

Can they truly be called the fittest man or women on earth?
Well as with any sport that gets this large and popular it does favour professionals at this sport who become specialised at this sport rather than just pure randomised fitness, it still is by far the best overall judge of fitness across a vast array of challenges in the world. As it takes into account, endurance, speed, strength & power.

So how does the crossfit open work?
There are 5 workouts in total, each workout will be released individually in 1 week intervals. The competitors then have from thursday until monday to complete the workout (in front of a qualified judge at a crossfit box), and submit their scores.

The top 50 athletes in Europe then go on to compete at the european regionals, with the top 3 from this event going on to compete in the crossfit games with the other athletes from around the world to decide who is the fittest man and women on earth with a prize of $275,000 for the male and female winner.

What makes the open good fun:
Its a tough challenge and each time you submit a score you can then see where your score ranks you on the leaderboard and compare yourself to friends, across europe and the world.

You need no weaknesses, so if your training for the open you must work on becoming a well rounded athlete. This forces people to strengthen areas they would usually ignore and ultimately fixes chronic faults a lot of people would other wise just carry on ignoring and suffering from.

This is my third year competing and I am the most capable I have have been at all the movements. I am feeling fit but not crossfit specific fit at the moment as I have been focusing on loads of different fitness challenges like rugby and running. So it will be great to see how I will score.
Ultimately its so much fun competing in this event with the massive crossfit community worldwide, locally and at our box.